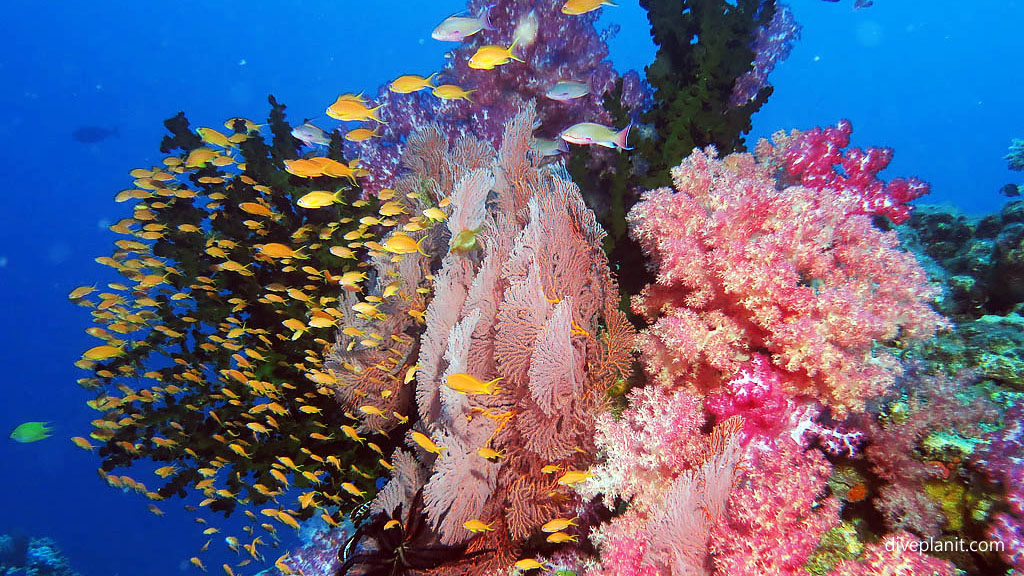 There’s no denying Fiji can easily be considered one of the best diving spots in the world. Its warm, crystal-clear waters feature one of the world’s densest populations of underwater marine life (including colourful fish, turtles, sharks, eels and manta rays). It has channels that connect lagoons to the ocean and pristine coral structures. Whether you’re a beginner or experienced diver, Fiji offers the full spectrum – from stunning soft corals to pelagic experiences. Here are 10 of the best diving locations in Fiji for you to visit.

Choosing your next Fijian Getaway is easy with the help of Captain Cook Cruises Fiji. Contact us today

Mantaray Island is a stunning spot that gets its name after, well, the many manta rays that inhabit the channel nearby from May to October. Manta rays come to Mantaray Island during those months to feed in the channel, which is filled with a wide variety of nutrients and plankton. You’ll be able to witness this wonder of nature with just a short boat ride. If you’re not much of a diver though, there’s always the option to snorkel off the beach.

Bligh Water is a stunning spot to go to if you’re looking for an epic dive, as this stretch of water features an impressive array of different types of dive sites – from pinnacles rising up to 900 metres from the ocean floor to gorgeous, multi coloured soft coral reefs. In addition to wonderful geography, a dive here also means witnessing rich and varied wildlife – as thousands of marine species hang around Bligh Water’s strong current located in between the islands of Viti Levu and Vanua Levu.

Located in the area of Somosomo Strait, near Vanua Levu and off the island of Taveuni, Rainbow Reef is a multi coloured wall of soft coral that looks just like an underwater rainbow. One of the most notable things about Rainbow Reef is the presence of anemones – which means there’s a big chance you’ll be finding Nemo! You’ll also get the chance to get up close with manta rays, leopard and reef sharks, and barracudas.

Kadavu is famous because one of the world’s largest barrier reefs – the Great Astrolabe Reef – is located here, which stretches all the way around the island. Coral pinnacles, passages, drop-offs, manta rays, tuna fish, marlin, sharks, hammerheads and many other sea creatures happen to hang around this impressive and untouched reef.

While the famous Rainbow Reef is located off the island of Taveuni, there’s more dive sites to see around the island. Divers come from all over the world to see the stunning Great White Wall – a vertical reef that’s 25 metres deep and is covered in white coral – creating the illusion that it disappears into the depths of the ocean.

The Mamanucas offer a wide range of diving sites to suit all experience levels. A noteworthy one is the Namotu Wall, which features a wide array of marine life including turtles, reef sharks, schools of barracuda, batfish, angelfish, butterflyfish and more. In addition, you’ll be able to witness the area’s incredible geography, such as pinnacles covered in hard and soft corals.

The Yasawas is the perfect diving sport for beginners who want to be mesmerised by the Fijian waters, coral reefs and colourful marine wildlife. Access to the islands is either resort-based or through a cruise. The volcanic terrain around the Yasawas offers the dimension of a quite steep vertical underwater terrain, featuring swim-throughs and canyons.

The Southern Yasawa Islands are famous for pelagic encounters. Here, at Barefoot Kuata Resort you can snorkel and dive with sharks, and at Manta Ray Island, between May and September, you can snorkel with manta rays. In addition, breathtaking coral gardens off the coastline in the midst of pure tranquility can be expected on the island.

Are you a fan of sharks? Well, Viti Levu is just the place! Viti Levu is home to the Shark Reef Marine Reserve, located near the main island’s coast. For the last decade, the reserve has been providing the opportunity for daredevil divers to dive with bull sharks and tiger sharks in Beqa Lagoon.

The amazing Namena Marine Reserve and coral reef is located in the waters between Viti Levu and Vanua Levu, and is home more than 1,100 fish species and about 400 corals – including dolphins, turtles and humpback whales. This makes the reserve one of the top diving and snorkelling sites in Fiji.

Fiji is undeniably one of the best spots to practice diving and snorkelling in the world. So whether you’re a budding snorkeler who’d love to see some colourful fish at Rainbow Reef or an experienced diver who’s keen to explore the depths, coves and canyons of the Yasawas, a diving adventure in Fiji with Captain Cook Cruises is a must-do activity.

There’s no denying Fiji can easily be considered one of the best diving spots in the world. Its warm, crystal-clear waters feature one of the world’s densest populations of underwater marine life (including colourful fish, turtles, sharks, eels and manta rays). It has channels that connect lagoons to the ocean and pristine coral structures. Can You Dive in Bad Weather? How Safe is Open Water Diving?