About the Sacred Islands

The Narokorokoyawa Sacred Islands are situated to the north-west of the Mamanuca Islands and south of the Yasawa Islands.

Fiji had no written language prior to contact with Europeans and the country’s history is based on legends that have been passed down from generation to generation. For the villagers of Tavua (who guard and protect the Sacred Islands), the culture and history of Fiji began with the arrival of Rogovaka – a great war canoe carrying the first Fijians – Tui Na Revurevu and his people – to the islands of Fiji. They landed on the largest of a small group of islands, known today as the Norokorokoyawa Sacred Islands. Two of the islands are named after parts of the canoe “Nai Raviravi n uli” (steering oar rack) and “Musumusu Ni Karikari” (cutter for spar boom).

Tui Na Revurevu settled on the largest of the islands, Vanua Levu, and built his fortress, the remains of which can still be seen today at the sight of the sacred village. Navanualevu is the site of the Sacred Caves which became the centre of ceremonies and rituals of the chief priest. Tui Na Revurevu’s sacred pool, where it is forbidden to swim, is located on the other side of Navanualevu behind the sand cay. The second group of settlers realised the Narokorokoyawa islands had already been settled and sailed on until finally arriving at Vuda (meaning source) on the main island of Viti Levu.

Regarded as the birthplace of Fijian culture, the Narokorokoyawa islands have remained sacred and all visitors pay respect by presenting yaqona or kava at the sacred caves. Tongan missionaries arrived here in the early 1800’s and since they did not follow the protocol they were taken into the cave and were never heard of again.

Scientists believe the islands of Fiji were settled over 3,500 years ago by the people of South East Asia as they migrated east through the Indonesian archipelago, Papua New Guinea, Vanuatu and Solomon Islands.

The five islands or Narokorokoyawa

Permission to visit the islands has been granted exclusively to Captain Cook Cruises. Experience them on our 3 & 7 night Southern Yasawa Island Cruises. 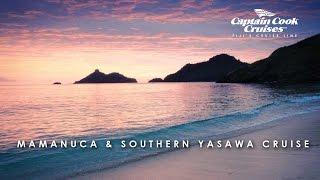